Acidosis in calves – can I prevent it?

Calf acidosis is not only a common complication in calves with diarrhoea and rumen drinkers, but also occurs in calves that are in good health. However, all forms of acidosis in calves result in reduced feed intake, less daily weight gain, a delay in growth and a poorer immune defence – leading to a negative effect on later milk yield. 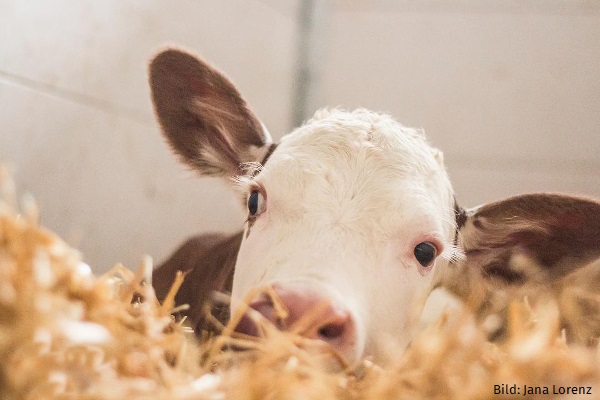 In this article, you will learn what exactly is meant by acidosis, how it develops and what measures can be taken to prevent it.

What exactly is acidosis?

Acidosis is generally understood to be hyperacidity, i.e. an excess of acids in liquids, which is caused by a disturbance in the acid-base balance of the body. This can be caused either by a much too high acid content or by a relative surplus, i.e. by the absence of buffer substances.

Acidosis is generally understood to be the hyperacidity of the blood (metabolic acidosis), i.e. when the physiological pH value (approx. 7.4) falls to values below 7.35. But other body fluids can also develop acidosis: Many people are familiar with rumen acidosis – rumen acidosis can develop in both calves and adult cattle, although the mechanisms are different.

How can I recognize different types of acidosis?

How do I recognise metabolic acidosis?

The symptoms of a metabolic acidosis depend on its severity and usually manifest itself with general symptoms: The calves prefer to lie down, are unsteady when they stand up later and are sometimes unable to stand up at all in the case of severe acidosis.

However, since calves lose a lot of fluid due to diarrhoea, which is usually the cause, determining the degree of dehydration can provide valuable information on the severity of acidosis. For this purpose, an estimate is made of the distance between the eyeball and the front corner of the eye. The more fluid lost, the deeper the eyes sink inwards and the greater the distance becomes. Secondly, the skin fold test is used to determine the skin elasticity. To do this, a fold of skin is pulled up on the side of the neck using your fingers and the time it takes for the fold of skin to completely disappear is assessed.

We have compiled the following table to give you some guidance.

How do I recognise rumen acidosis?

Due to the pain in the rumen, the calves show, in addition to a generally reduced state of health, signs such as variable feed intake, teeth grinding, a full rumen and a curved back. Severe cases also show colic symptoms.

In more chronic cases, the coat will be dull, shaggy, possibly with chafe marks, and the calves will be looked after.

How exactly does acidosis develop in calves?

In the vast majority of cases, clinical acidosis in calves is caused either by diarrhoea or by rumen drinking. Subclinical acidoses, on the other hand, are more often feed-related.

The standard: Due to the massive loss of fluid through the intestines, many diarrhoeal calves experience acidosis – why?

Calves with severe diarrhoea can lose up to 20% of their body mass in one day. Even if the kidneys are able to retain more fluid to a certain degree as a compensatory measure, a fist count of 10% can be calculated. If the eyes are sunken deep in the sockets and an drawn up skin fold on the neck does not pass immediately, but remains, even if only for a short time, clinical symptoms of dehydration are already visible and the calf has already lost about 2 litres of body fluid!

But it is not only water that is lost: large amounts of electrolytes are also washed out, especially sodium, potassium, chloride and hydrogen carbonate. The latter is the most important buffer substance for the acid-base balance; with this knowledge, the development of acidosis can now easily be explained: The acids normally present are simply buffered by hydrogen carbonate in their physiological state – if this buffer is lost, acidification occurs.

Incidentally, it can also happen that diarrhoea is already starting to improve, with the clinical symptoms of acidosis only appearing a short time later.

To prevent this form of acidosis, adjustments must be made in order to control severe calf diarrhoea. The most important measure to be taken is to ensure an early and sufficient supply of colostrum, according to the 3Q-rule: Quick, Quantity, Quality.

The acute form of rumen acidosis of the calf develops due to a disturbed pharyngeal reflex or forced drinking despite species-appropriate feeding. Carbohydrates from the drinks then reach the still underdeveloped rumen in larger quantities, where they ferment and are broken down into lactic and butyric acid.

These acids not only irritate the rumen mucosa, which manifests itself in severe abdominal pain with corresponding pain symptoms, but can also lead to metabolic acidosis in cases of prolonged rumen acidosis.

In fact, there are many forms of acidosis that are caused by feeding. The problem in these cases is the underdeveloped rumen. It is only mature enough and ready for high concentrated feed contents between 12 and 16 weeks. However, it is often given earlier!

If it is soaked already at 10 weeks, the rumen is not yet ready for the efficient processing of the large quantities of solid feed that are now being offered. Due to the (correct) assumption that carbohydrates and their degradation products promote rumen maturation, concentrated feed rich in starch and sugar (lots of cereals and maize) is often fed during this period shortly after weaning, which is then microbially fermented in the rumen. Large quantities of short-chain fatty acids are produced, but these cannot be buffered by the underdeveloped rumen and cannot be transferred to the blood in sufficient quantities – a feed-related rumen acidosis develops, which can last for several weeks with pH values below 5.8 in some cases. In the next stage, if the fatty acids are passed on into the intestine, it can even lead to colon acidosis.

These long-lasting, often subclinical acidoses initially cause unrecognised lower increases and damage not only the rumen but also the intestine – in the worst case, permanently, which can then even shorten the working life.

However, if there is massive damage to the epithelium in the rumen and intestine, parts of the bacteria can also enter the bloodstream. These are LPS (lipopolysaccharides) from the cell wall of certain bacteria, which act as toxins and can initially lead to a local inflammation of the mucous membrane, and later to a generalised inflammatory process with a fever.

The symptoms are similar to those of the above-mentioned rumen-drinker rumen acidosis. In advanced cases, however, the calves show additional itchy skin due to the damage to the liver and thus increased scratching, chafed skin and tail tip necrosis.

Interim conclusion: Acidoses in calves are bad for the farm in many ways!

All forms of acidosis in calves, including subclinical, i.e. acidosis that is not clearly visible, lead to additional time spent on monitoring and care and to veterinary costs. Calves with acidosis drink less well, have worse weight gain, often need intensive care, are susceptible to infections and lag behind their peers.

And that’s not the only problem: Poor weight gains at an early age (in week 16 up to 40kg less body weight than peers!) are not only annoying when it comes to selling, they also have a significant influence on later milk yield, health and lifespan!

The calves of today are the cows of tomorrow! As a farmer, how can I prevent acidosis?

Through an optimised drinking regime and a diet adapted to rumen development, feed-related rumen acidosis in calves can be almost completely prevented from the outset.

Watering for only 14 days longer, i.e. until at least the 12th week, significantly reduces the incidence and extent of feed-related acidosis. And that is not the only advantage: The subsequent concentrated feed intake is then also higher!

If the drink is offered ad libitum , the calves will gain more weight, even after weaning. In addition, the surface area of the intestine is increased compared to calves with a restrictive feeding, which leads to an improved absorption capacity. The target quantity should be about 12 litres of whole milk or comparable milk replacer per day.

It is often feared that higher milk or MAT levels towards the end of the drinking period could result in the calves receiving less starter feed in return – but the exact opposite is true: In the early weeks, they also voluntarily take up less solid food and increase the amount when weaning much more than their peers.

Just as important is a gradual weaning: Ideally, from around week 7 (when the calves should already be consuming about 1.5 kg of concentrate), it is recommended to slowly reduce the milk quantity by about two litres per week, so that at least two litres per day are still being fed in week 12.

A good dry TMR also contributes to stable calf development. If the drinking regime is right, the calf will independently start to consume additional solid food.

Compared to a separate feeding of maize silage, hay and concentrated feed, calves with dry TMR take in more raw fibre and less easily fermentable carbohydrates, which on the one hand prevents rumen acidosis and on the other hand promotes rumen development. In addition, the total dry mass intake is significantly improved with a tasty dry calf TMR resulting in weight gain.

With JOSERA Linovit, a special protein and mineral feed supplement, the farm’s own dry calf TMR can be optimised even further. The valuable components support calf development in many ways: The apple pomace makes the ration even tastier, feed intake increases, the intestinal and rumen mucosa is protected by linseed meal, live yeasts strengthen the development of the rumen flora and selected herbs additionally support the immune system.

Hygiene in the calf Stall

Most illnesses of calves are so-called ‘factor diseases’. This means that several causes are responsible for the outbreak of a disease. Therefore, diarrhea can be the result of diarrheal pathogens, inappropriate feeding, stress or all three.