The “without genetic engineering” sector is seeing increased demand and continues to grow. Some dairy farmers are being forced to make changes to their rationed feeding programme. This is as a result of increased use of rapeseed meal in many rations due to GMO-free feeding, and the reduction of the permissible phosphate surplus from 20kg to 10kg over a six-year average as a result of the new fertiliser ordinance. 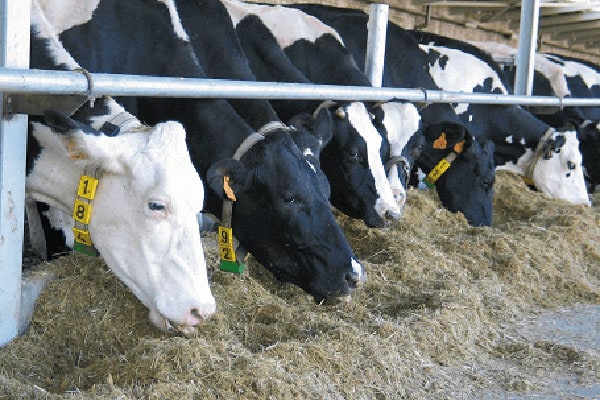 The “Without Genetic Engineering” seal was introduced by the German government in 2009 and is intended to provide consumers with guidance on the matter.
Since June 2010, Austria’s dairies have only been processing GMO-free milk and this trend is also gaining momentum in Germany. The number of dairies that rely on milk without genetic engineering is increasing:
Friesland Campina, Berchtesgadener Land, Breisgaumilch and Allgäuland are just a few examples. Bauer, Ehrmann, Humana and Zott are also in the planning stage.

Dairies are also reacting to the demands of the food retail trade. Since July 2016, Lidl has been placing the “Without Genetic Engineering” label on its own-brand milk. REWE and ALDI Süd are also wrestling with GMO-free dairy products to win over consumers. More than half of consumers report in surveys that “Without Genetic Engineering” is an important quality criterion for food. People who do value this, spend 44% more per purchase than others.

The requirements of the food retail trade not only put dairies under pressure, but also place milk producers under pressure. A farmer therefore needs a certificate for a large number of animal feedstuffs. In addition, certain feedstuffs, such as GMO soybean extraction meal from abroad, can no longer be used. About 80% of soybean cultivation for the world market takes place in the USA, Brazil and Argentina where a large proportion of cultivated soy plants is genetically modified. Due to additional costs for separation and analysis, GMO-free soy is sometimes more than €10/dt more expensive, depending on the market situation.

Those who nevertheless want to feed their cows GMO-free in a cost-effectively and safe manner, must therefore think about alternatives.

What possibilities are there and what needs to be taken into account?

The farm’s own basic feed such as grass and maize silage can be produced safely without genetic engineering. This also applies to carbohydrate carriers, such as cereals and molasses pulp that form part of the ration.

More problematic in this respect, however, are protein carriers. Soya, of which more than 90% is imported from the USA and Brazil, is mostly declared as being genetically modified. This means that despite being of high quality in terms of feed value, the meal cannot be used in GMO-free milk production.
The obvious solution is to design a mixture individual to the form, which does not include soya.

What do we have to watch out for?

Legumes are considered well suited to this. As nitrogen collectors, they also have a high preceding crop value.

It is important to always request the current feed values when requesting offers from the trade!

Table 1: Examples of crude protein and the energy content of farm feeds and purchased feeds

Optimal use of resources

An economically effective way is to make optimum use of your own resources. Here, the quality of the grass silage is of central importance for protein supplies for dairy cows and nothing should be left to chance. Is the nutrient supply of the soil correct? What is the plant composition on the grazing land like? Do you need to carry out over-seeding or instigate breaks? Are the surfaces rolled/harrowed before first cut? How can I ensure the optimal cutting time? How can I guarantee optimum compaction? Will the feed be preserved well enough so that the cows want to eat it? In recent years, the conditions for silage have not always been perfect. Therefore, the use of JOSERA silage inoculants is recommended for safe and fast fermentation with low losses in all cuts. Studies show a significantly lower ammonia (NH3) content in silages treated with JOSERA Josilac.

The valuable protein of the first cut is therefore also available in the silage and can be optimally utilised by the cow. The fermenting acid pattern of the Josilac preserved silage is free of butyric acid and thus ensures feed intake, since this decreases with higher butyric acid contents. An inexpensive revaluation of the ration with crude protein is possible with feed grade urea. JOSERA offers a safe product for this application: JOSERA Rumi N. In addition to urea, it also contains phosphorus, sulphur and rapidly available carbohydrates. All these ingredients are needed by the microbes in the rumen for protein synthesis. Furthermore, a ration calculation with current feed values always makes sense to ensure an optimal supply for the cow. This helps to prevent problems from arising in the first place and therefore saves money. All JOSERA products are suitable for the production of GMO-free milk. Corresponding certificates can be viewed and downloaded from the homepage.

Every farm can convert its production to GMO-free milk. When changing from soy meal to a soy-free ration, however, the change in the rumen must be taken into account, which is known to take several weeks. Even without soya, yields of over 10,000 kg of milk are possible today, while animal health remains the same. The dairies pay a surcharge of approx. 1 cent/litre of milk for removing any element of genetic engineering. The expenditure can be covered by the use of inexpensive fodder with it

Rape meal is a common alternative to soya in GMO-free feeding of dairy cows. 3 kg and more are often used. Due to the high phosphorus content of 11-12 g/kg of rapeseed meal, the phosphorus requirement in many rations is already covered without mineralisation and is also sufficient for high milk yields. In some rations, the excess phosphorus is more than 15 g/animal per day, without a mineral feed being supplemented. For a dairy farm with 100 cows, surpluses of over 500kg can occur over a year. This has a relevant influence on the nutrient balance of phosphorus netting for small farms. In addition, a high excess of phosphorus in the ration is not advisable for cost reasons, in addition to burdening the metabolism of the cow. The excess phosphorus must be channelled through the metabolism and excreted by the body. In addition, the physiological need of the cow requires that, if necessary, appropriate amounts of feed lime be added. Thus, when feeding a p-free mineral, costs for phosphorus and lime can be saved and the cow’s metabolism can be relieved.

Example of a dairy cow in practice

This will be illustrated by a practical ration based on the maintenance needs of a 650kg cow and the corresponding requirements of 34kg milk yield with 4% fat and 3.4 % protein. The quantities of grass and maize silage are balanced and the protein and energy sources used are rapeseed and cereal meal, grain maize and a 20/4 milk feed (see Table 1). Mineralisation is carried out in ration 1 using a mineral feed with 2 % P. For comparison, a p-free mineral feed is fed in ration 2. All other components are identical.

For the sake of clarity, the presentation of the ration ingredients in Table 2 has been shortened. Since only the equipment of the mineral feed changes, changes therefore only occur in these areas. The requirements for the rations should be 138.8 g calcium and 85.4 g phosphorus and the Ca:P ratio should be above 1.5:1.

When using a mineral feed with 2% P, we achieved a surplus of a good 17.3 g per animal per day with 102.70 g P. With ration 2, the feeding of a mineral feed with 0% P, this excess can be reduced by 6 g. At 96.70 g, P still has a lead of over 11.3 g, but the reduction in the mineral feed helps to relieve the animals’ metabolism and at the same time meet the requirements of the fertiliser ordinance.

As the central metabolic organ, the liver is exposed to considerable stress around calving (transit phase). A cow quickly slides into ketosis, bringing far-reaching consequences.

Cows or dairy cows in a meadow – it makes for a pretty advertising picture. But to make a good start there are certain things that must be done so as not to put the animals’ welfare at risk.