Feed consumption- how much dry matter does my cow eat?

In order to ensure that the cow is supplied with nutrients in line with her needs, it is not only the energy and nutrient concentration of the feed that must be taken into account, but also the feed intake capacity of the dairy cow. 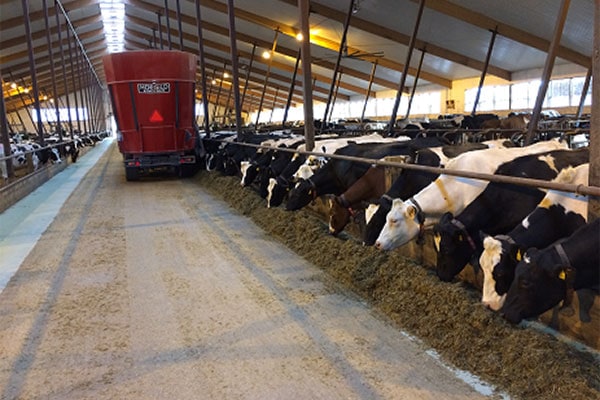 In order to supply a cow according to demand, while at the same time using the farm’s own feed and purchased feed economically, it is of great importance to know the feed intake (dry substance consumption) of your cows. It is therefore important to know the different influences on the feed intake.

The feed intake and thus also the saturation of the animals are controlled by the so-called physiological and physical regulation. This means that feed intake depends on several factors. These factors can roughly be divided into three areas:

Animal-related factors influencing the level of feed intake are lactation status, lactation number, live weight and milk yield. At the beginning of lactation, feed intake is significantly lower than at the end of lactation. However, the milk yield increases very strongly in the first weeks of lactation. Therefore, a high energy density in the feed is all the more important during this time.
Heifers are double-burdened: On the one hand they are not yet fully grown and on the other hand, the calf must also be cared for.
On average, the feed intake increases by 0.6-1.2 kg dry matter per 100kg additional body mass (Kirchgeßner 2008). The reasons for this are a larger rumen volume and an increase in maintenance needs.
In addition, milk yield has a major influence on feed intake. The feed intake increases with the milk yield. However, this effect is lower at the beginning of lactation than at the end. Finally, the breed has an influence on the feed intake.

Tasty, aromatic and energy-rich basic feed is the key to high feed intake. The digestibility and energy content of the feed also has a major influence on feed intake. If, for example, the content of net energy lactation increases by 1 MJ per kg dry matter, the total feed intake increases by approx. 1 kg dry matter per animal per day. The decisive parameters here are the extent to which the fodder is broken down, the speed at which it is broken down and the passage in the forehead. Feed that is digested and broken down properly in the stomachs creates space again for new feed and thus increases the feed intake. The supply of crude protein also influences the level of feed intake. In rations with low crude protein contents and associated negative RNB, feed intake may decrease significantly.It should be pointed out again that tasty, aromatic and energy-rich feed is the basic prerequisite for high feed intake. As a rule, such silage also exhibits an optimal fermentation acid pattern with a lot of lactic acid and no butyric acid. Butyric acid content in silage should be less than 0.3% and acetic acid content less than 3%.
In addition to high water contents, high dirt contents also noticeably reduce feed intake. Another influence is the particle length: as a rule, more is taken up by short chopped fodder. This is due to faster passage in the rumen. However, the structural effectiveness of a ration must always be assessed in order to prevent feed-related diseases.

Environmental factors primarily include the ambient temperature. High temperatures have a negative effect on feed intake. It is true that dairy cows generally tolerate cold and dry weather better than humid and warm climatic conditions. Adopting an individual approach to feed and animal management also influences feed intake. The most important influences in terms of fodder are the presentation of feed and the entire management of the silo and feeding table. With regard to dairy cows, optimum dry herd management and a good, healthy herd are the cornerstones for optimum feed intake. Only dairy cows with healthy claws, who are not in pain and do not regularly suffer stress visit the feeding table. This is a basic prerequisite to achieve a certain feed intake.

Due to the various influences on feed intake, the levels of dry matter intake in the individual dairy cows vary considerably. There are estimation formulas, which take the various influencing factors into account, and thus determine the absorbed dry substance. By way of orientation, table 1 shows some examples of different feed intake at different performance levels.
Do you have any more questions? Then please do get in touch with the JOSERA Agricultural Team.

In the winter months, fertility problems increasingly occur in many dairy herds. Still heat, returning to oestrus and re-insemination can accumulate. Follicular cysts and embryonic fruit death are also fairly common at this time of year.

How does feed influence the milk ingredients?

Milk is still one of the world’s staple foods. The development of milk production in Germany reflects the enormous performance potential of herds on farms. Read more about production and the nutritional status of dairy cows.