Ovarian cysts- a common cause of fertility disorders

A nuisance many farms are aware of is multiple inseminations, which are caused by fertility disorders. Ovarian cysts are a common cause here. Cows with cysts are problem animals. Because of a longer gestation period, reduced pregnancy rates, and cyst treatment, the costs are three times higher than “normal” insemination. 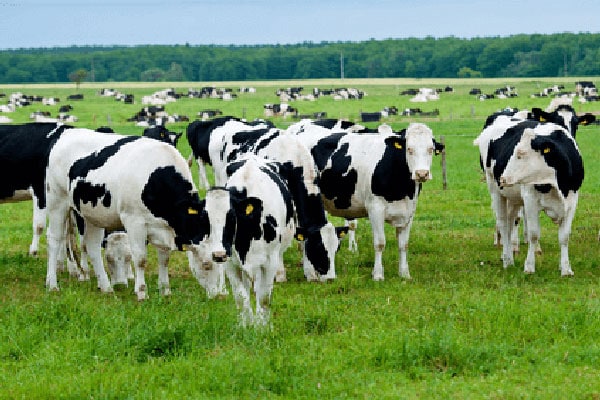 Because of fertility problems, the number of stillbirths also increases. The situation becomes critical when ovarian cysts do not spread to individual animals but rather to the entire population. In about 10% of dairy cows, cysts occur once or even more frequently over a lifetime. In practice, however, internal values of up to 40% cyst load in the herd are also mentioned.

But where do these come from, and how can they be recognised?

What are ovarian cysts?

Ovarian cysts usually form in cows with negative energy balance and show up as large egg bubbles. They produce as a “protection” from another pregnancy blocking hormones that prevent another cycle. Thus, the cow is protected by her own body from excessive energy consumption.

The pregnancy of a cow with a cyst can quickly become very expensive, as it may need to be inseminated frequently.

Cause of cyst formation

The quality of the follicles also depends on the energy supply. A lack of energy leads to the fact that the follicle maturation cannot proceed optimally. The follicles are therefore inferior. Studies confirm that, among other things, a negative energy balance around the birth period and during the first ten weeks of lactation is reflected in an increased number of cysts. For example, increased acetone levels indicate an increased risk of cysts (Table 1). The formation of cysts is a self-protection of the animal from the stress of pregnancy. This is why high performance animals are particularly affected.

In addition to a negative energy balance, a number of other risk factors also favour the development of cysts in addition to feeding, this also includes husbandry and genetics (Table 2).

Ultimately, the main cause of cysts is a defective hormone response from the ovary to the brain. The hormones progesterone and LH (luteinising hormone) are particularly important here. If an imbalance of these hormones occurs, normal ovulation is prevented, and the follicle develops into a cyst. Animals that are in an energy deficit often only produce one third of the normal LH amount; this can be too little for normal ovulation. LH values that are too high can also lead to cysts. However, not only LH but also progesterone often plays a decisive role in cyst formation. But not all cysts are the same.

Which forms of cysts are there?

Follicle-theca cysts are thin-walled, large structures on the ovaries. They are formed from follicles that do break open and are not regressed. In this cyst form, the progesterone level in milk and blood is low. Many affected cows show oestrus symptoms (nymphomania), and their labia are enlarged with a turbid discharge often flowing out of the vagina. Also typical are a hollow tail formation and collapsed ligaments. There are often several follicular cysts on the ovaries. These can be quite large. Lutein cysts are thick-walled and can only be found as a single structure on the ovary. They arise when a corpus luteum is not regressed. In the blood or milk of such cows, the concentration of progesterone is high. The cows show no oestrus symptoms.

For good fertility, an optimal supply of cows with energy, trace elements, and vitamins – even before calving – is crucial because a follicle needs 60 days to fully develop. A poor nutrient supply before calving is detrimental to newly maturing follicles. Follicle maturation requires a high content of glucose as well as sufficient phosphorus, which is required for energy transfer. In the transit phase, it is therefore important to keep the energy deficit as small as possible. In this phase, the animals tend to break down their own body fat. This fat breakdown leads to the formation of ketone bodies, and ultimately to ketosis. In the worst case, this leads to fatty liver. A damaged liver can no longer provide enough sugar and affects the occurrence of cysts in other lactations.

The use of DairyPilot supports the animals in this critical phase. It ensures better energy utilisation in the animal, lowers the risk of ketosis (and thus the probability of cysts), and ensures a better liver metabolism over many lactations. This reduces veterinarian costs, increases fertility and life expectancy, and reduces stillbirths resulting from fertility disorders.

It should be ensured that the stock is checked regularly on his body condition. Precautionary measures against ketosis diseases should continue to be taken. In the case of ketosis should be acted quickly.

Also, maximizing feed intake should be respected, not just in ovarian cysts at risk.

Cows or dairy cows in a meadow – it makes for a pretty advertising picture. But to make a good start there are certain things that must be done so as not to put the animals’ welfare at risk.

Stall hygiene for cattle – count on the right concept !

High germ content in the environment negatively affects the animal’s immune system. The organism is busy producing antibodies and eliminating germs instead of producing milk, growth or reproductive hormones.