Cereals in the feeding of dairy cattle

Due to falling grain prices, a feed made up of your own and potentially purchased grain becomes even more of an interesting prospect. Cereals can also contribute to reducing costs in milk production as a component of compensatory feed in the case of protein surpluses in the ration, such as those occurring in green feeding or grazing, or in milk feeds that are balanced in terms of their milk production value. 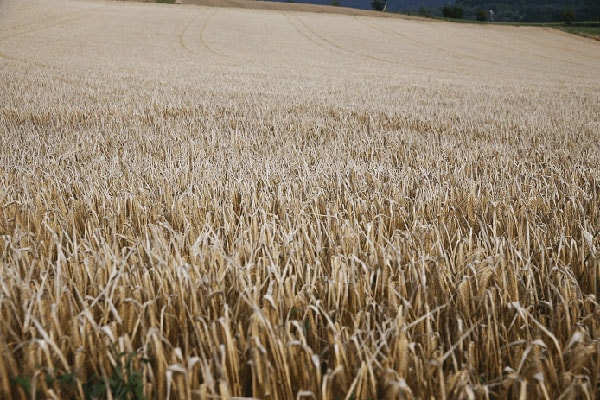 Regionally produced grain is characterised by its high energy content, but with 9% (grain maize) to 13% (wheat) crude protein, it also contains significant amounts of protein. The mineral content of calcium is very low, while the phosphorus content of 3-4 g is sufficient for the production of 2 to 2.5 kg of milk.

Processes in the rumen

The energy content of the grain is largely supplied by the starch. The starch is degraded in the rumen to short-chain fatty acids, with the rate of degradation and speed varying between cereals. (See issue 8/2013 ‘Energy for the dairy cow’)
Wheat, rye and triticale in particular are broken down very quickly, meaning that the rapid release of short fatty acids can cause a more or less pronounced acidosis of the pancreas (=pansenacidosis).

In contrast, maize starch is decomposed much more slowly in the rumen and, depending on the type of corn (tooth corn or hard corn), a larger proportion of it reaches the small intestine where it is absorbed as glucose.
It should therefore also be considered whether part of the grain that we produce ourselves, in this case wheat or triticale, should be sold and maize bought in.
The use of cereals – in particular maize – not only leads to a reduced risk of ketosis through better glucose supply to the cow in the small intestine, but positive results have also been observed with regard to the quantity of milk and, in particular, milk protein production. In order not to reduce the rumen pH value too much, the power feed quantity should be distributed over several small doses. Crushing instead of fine grinding also slows down the conversion in the rumen and does not accelerate acid production to the same extent.

If the pH value falls below 6.0 – as was the case with feeds of more than 3 kg of high-performance feed per feed – intake of basic feed is also impaired. It is therefore advantageous if the performance feeds are distributed evenly throughout the day. In addition, a part of the high performance feed can be offered in the upgraded mixed ration. Here, however, no more than 2 kg of milk should be offered under the average milking of the herd in order to prevent the fattening of the old milkers. For transponder stations, the quantity of concentrated feed per visit should be limited to 2 kg. This also applies to concentrated feed in the stanchion barn.

All types of cereals, in combination with protein and mineral feeds, are suitable for the production of the farm’s own high-performance feed mixtures. It is of benefit, however, if larger proportions of wheat and grain maize are taken up, since per kg of milk yield feed, approx. 2.3 kg milk can be produced. The proportion of wheat or maize in the mixture should not exceed 50% or 30%.

The frequently cited disadvantages of farm performance feed mixtures, such as rumen acidosis, only occur when the grain is too finely ground and the quantities of concentrated feed exceed 3 kg per dose.
It is quite possible, using appropriate feeding technology, to ensure the performance feed supplementation is exclusively secured by means of private own grain and a protein and active ingredient supplementation. Talk to your JOSERA consultant.

Use grain as energy feed for ruminants!

The feeding of cereals has a long tradition in dairy farming. The high energy contents in particular are very useful for performance-oriented rations. However, in order to ensure that high performance is also fed to ruminants, it is important not only to ensure a sufficient supply of raw fibres but also to pay attention to the corresponding quantities of stable and unstable starch.

The effect of cereals, when used correctly, has a very positive effect on the cow’s energy metabolism. However, it should be noted that the energy source is mainly in the form of starch. This is broken down into short-chain fatty acids, with a relatively short degradation rate for cereals. In high quantities of cereals, this flooding of short-chain fatty acids can lead to rumen aidosis. The higher the resistance of the starch, the slower the rate of degradation in the rumen. The corresponding starch contents and those of the stable starch are shown in the following table; two maize silages are also listed for comparison.

Table 1: Starch and energy content at 88% DM in various animal feeds (according to Gruber table 2015)

It therefore makes sense to check the strength content of the feed, the ration and the components used when designing the feeding. The daily ration should not contain more than 25% unstable starch. Grain maize is a useful supplement for high-capacity mixed rations, which already reach these limits due to the high proportions of maize silage and, if necessary, concentrated feed mixtures. The maize starch present is subject to a much slower degradation in the rumen than the starch in the rest of the grain. Larger portions of it therefore arrive in the small intestine and are absorbed here in the form of glucose. In this way, the cow can be given the required increase in energy via the mixed ration, even in high performance ranges.

However, the risk of acidosis can also be minimised or avoided by other measures. On the one hand, of course, the quantities administered play a role. In order not to reduce the rumen pH value too much, the doses should be distributed several times and should not exceed 3 kg per feeding. When using transponder stations, it is recommended to reduce the KF quantity to 2 kg per call-fetch.
In order to obtain an additional safety buffer, it is possible to add an appropriate amount of water to the mixed ration. This allows the grain meal to adhere to the fibre components, which reduces segregation and feed selection. With higher temperatures in summer, it is important to keep an eye on the stability of the mixture and, if necessary, to use a freshness concentrate.

The use of buffering substances such as sodium bicarbonate or JOSERA Multi-Buffer-Plant represents a further option for safeguarding concentrated feed rations. They increase the pH value in the rumen and reduce the risk, or prevent the occurrence, of rumen acidification. In addition to this chemical supplementation, the rumen can also be stabilised biologically. The integration of live yeast in the feeding of dairy cattle as rumen stabiliser has proved very successful here.
Existing rumen acidoses can be detected by faecal washing in addition to the analysis of milk performance test reports. If the procedure is carried out carefully, mucous membrane residues can often be found here. In the case of upcoming changes in the feed ration, a before and after comparison could then be made very well. We will be happy to help you with the exact design of the ruminant-suitable ration or the examination for rumen acidosis.

Feed fat – any effect on metabolism?

Feeding around dry cows and fresh lactating cows poses a very special challenge. Especially in the last days before birth, a high energy density is needed in the food.

Increase the milk yield of your herd now!

Is your operative goal to increase the performance of your herd? Or are the health and resilience of your herd important to you? Then read more about JOSERA DairyPilot!