Mixed rations have become increasingly common since the late 1990s. What are these systems, and which has proved to be the most effective? Is TMR (total mixed ration) the right choice for your business, or has PMR (partial mixed ration) proven to be a better system? 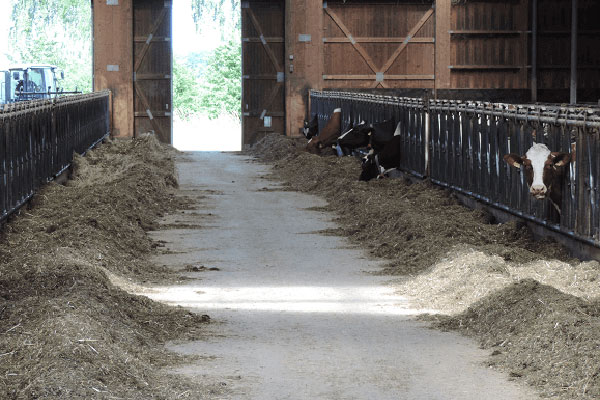 With TMR, all feed components (staple feed, concentrated feed and mineral feed) are mixed and fed to the animals as a ration. With regard to the amount of concentrated feed, several groups should be subdivided in order to avoid over- or under-supply. There is no concentrate supplement.

Valuable!
In a mixed ration, less tasty, but still important feed ingredients such as straw to increase the structural proportion, can be mixed with. This ensures that they are not sorted out.

In the case of PMR, the ration on the feed alley ideally contains all basic staple components, mineral feed and a proportion of concentrated feed for a herd-specific milk production value. This is designed for the respective performance potential of the herd. The remaining concentrated feed is allocated to each animal individually depending its current level of performance, e.g. via a transponder-controlled concentrated feed station.

The condition for the smooth operation of both methods is the availability of several feed components to compensate for the staple feed ration and to cover a targeted milk production value. It is important to ensure that the ration is mixed homogeneously. Only then can the selection of individual feed components be counteracted at the feed alley!

From a nutritional point of view, TMR represents an optimal form of feeding. Provided there are several performance groups with different rations for the respective performance requirements. This requires a certain size of herd. If these conditions are fulfilled, TMR offers some advantages. In the rumen, a possible synchronous fermentation is achieved. Simultaneous fermentation of feed components from energy and protein has a positive effect on animal health and milk yield. There are less pH fluctuations in the rumen. This leads to a lower risk of acidosis, for example.

PMR, on the other hand, presents a constant risk of acidosis in animals that receive higher amounts of concentrated feed via the transponder due to violent pH fluctuations. The individual concentrated feed portions should be distributed over several small portions.

Another advantage of TMR is that homogeneous mixing counteracts any selection of individual feed components. There is also the option of using low-cost regional by-products. From the point of view of economical farm management, the reduced workload and time saving are further advantages of TMR. Likewise, the cost of a transponder-controlled concentrated feed station or similar can be saved.

Disadvantages of TMR: Keeping at least two, but preferably three performance groups is a condition for TMR to make sense from a physiological point of view. This creates difficulties for smaller populations. In the case of PMR, on the other hand, concentrated feed can be allocated to individual animals and this is also ideally suited for smaller farms. If TMR feeding is used when only one performance group is kept, deficiencies in animals at the beginning of lactation are not uncommon, along with the associated metabolic problems such as ketosis. Furthermore, the risk of fatty degeneration in animals increases at the end of lactation. These animals then often cause problems in feeding groups, start lactating poorly, and begin a vicious circle that can lead to further negative consequences such as fertility problems.

Other possible problems that occur with both TMR and PMR may arise when mixing the individual feed components. For example, mixing components for too long can lead to a structural deficiency of the ration. The feed is literally mixed into “mush”. This in turn increases the risk of acidosis in the population.

There are advantages and disadvantages of both systems. Which system is a better fit depends on the circumstances of the respective farm. If you have any questions, please contact your local JOSERA consultant. Detailed advice can be obtained from the JOSERA consulting service.

Compact TMR – what is it?

What is the idea behind the new feeding concept brought to us by Dr Niels Bastian Kristensen from Denmark?

The requirements of traditional TMR and the challenges associated with it are well known, but far from easy to meet. A good ration needs more than specific nutrients, a sufficient structure and good palatability.

Above all, it is crucial that these are fed in a homogeneous mixture and eaten steady. Only by avoiding feed selection at the feed alley a high-performance cow can be fed healthy according to its needs and the functioning and health of the rumen be maintained or improved. Many presented rations fulfil the specifications purely mathematically in order to supply the lactating cow correctly. However, a glance at the feed alley or milk yield recording often reveal weaknesses in the presented ration, as shown in both images and frequently encountered in practice.

Feed selection at the feed alley (Photo by Kristensen)

With this newly-developed feed concept, Kristensen seeks to ensure that feed selection and thus fluctuations in nutrient intake and hierarchical struggles at the feed alley are a thing of the past. The goal must be to feed the cow 24 hours a day, seven days a week at the feed alley and to offer the same feed.

How does the production of “compact TMR” work?

According to Kristensen, there are three points that must be taken into account before using compact TMR:

These three points should be regularly monitored and assessed, regardless of the feeding system. In the process of creating compact TMR, Kristensen provides a feeding protocol that accurately describes the process. These processes must be adhered to in terms of their design and time requirements, otherwise the system is not recommended, and successful implementation is not possible.

In the first phase, it is important to soak all dry components such as cereals, concentrated feed and pellets in water for one hour, and 12 hours when using dried pulp. While adding the water, it is recommended to leave the mixer running. The water helps to “bind” the feed to the grass silage later on and increases the weight of the mixture, which improves the functioning of the mixer-wagon. The amount of water required corresponds to the total dry matter of the ration components to be soaked. Using too much water is not a problem but using too less may cause the formation of lumps which will not be able to dissolve later in the process. Mineral feed can be added during phase one or two. In the second stage, grass silage and other fibrous feed are added. It is important to ensure that during the mixing process, all feed is properly mixed and not just moved around. The mixing time of 15 – 20 minutes must not be reduced. The third step consists of adding the maize silage and mixing for 15 – 20 minutes. Kristensen recommends mixing for 20 minutes if using a horizontal mixer-wagon. The mixer-wagon should not be stopped between the “structuring and finalising” phase and when depositing the feed, otherwise the heaviness of the feed may damage the machine when it is switched on again. The dry matter in the finished ration should be below 38% and the amount of feed should be calculated so that approximately 2% feed residue (equal to about 1 kg per cow) remains on the feed alley. An empty feed alley must be avoided.

What changes can be detected in feeding and animal behaviour?

Kristensen’s images and video material clearly shows the results that can be achieved with compact TMR. If successful, no feed selection takes place, and instead the animals eat the ration presented to them from the top. A short video in which cows were presented fresh food left a strong impression. The typical image of feeding in practice showing all cows at the feed alley or coming to the feed alley when feed is newly presented was not given here.

Image: The cows eat the ration from the top of the pile (Kristensen)


The animals remained in their stalls. Cows learn quickly, and since they have learned that feed selection is impossible, and thus there is no supposed “advantage” to be gained, they have no incentive to storm the feed alley. According to Kristensen, the proportion of animals at the feed alley should be below 50%. As a result, hierarchical struggles are reduced, and every animal has the chance to consume the required amount of feed at any time of the day. The result is shown in the accompanying image. The cows were given fresh feed in the morning, and it had not needed to be pushed once. According to Kristensen, the photo was taken between 4 and 5 pm in the afternoon. At no point along the feed fence is the floor of the feed alley visible. The cows ate the ration evenly throughout the day.

Image: The ration was eaten evenly over the entire feeding alley (Kristensen)


Are there any risks?

In addition to optimised feed intake, reduced downtime relieves strain on the hooves and means that the cow spends more time lying down. This improves rumination and milk production. But with all these advantages, requirements for a good stall in terms of size, litter and hygiene etc. also increase to avoid abrasions, bruises and inflammation, which otherwise result from more time spent lying down. One risk, particularly in the summer, is that the feed reheats. The goal should always be high-quality staple feed, e.g. by using silage inoculants. The use of fresh concentrates over the summer months should also be considered. In order to avoid residual feed being left in the mixer-wagon, it is essential to equip these with drivers. Kristensen strongly discourages anyone who does not or is not prepared to adhere to the procedures described in the protocol from using his feeding system.

The new feeding system is a great way to reduce animal stress when problems with TMR occur. It is a good addition to the pursuit of greater animal welfare, trouble-free metabolism throughout lactation, the exploitation of genetic potential and the associated higher productivity.
This is a new potential approach to increase homogeneity and minimise feed selection.

Is your operative goal to increase the performance of your herd? Or are the health and resilience of your herd important to you? Then read more about DairyPilot!

How does feed influence the milk ingredients?

Milk is still one of the world’s staple foods. The development of milk production in Germany reflects the enormous performance potential of herds on farms.