It is not easy to feed dry cows optimally: Dry cows are highly pregnant, so they need a lot of nutrients – but at the same time they should neither gain too much condition nor lose weight.
In this guide you will learn how to optimally prepare your dry cows for the start of lactation! 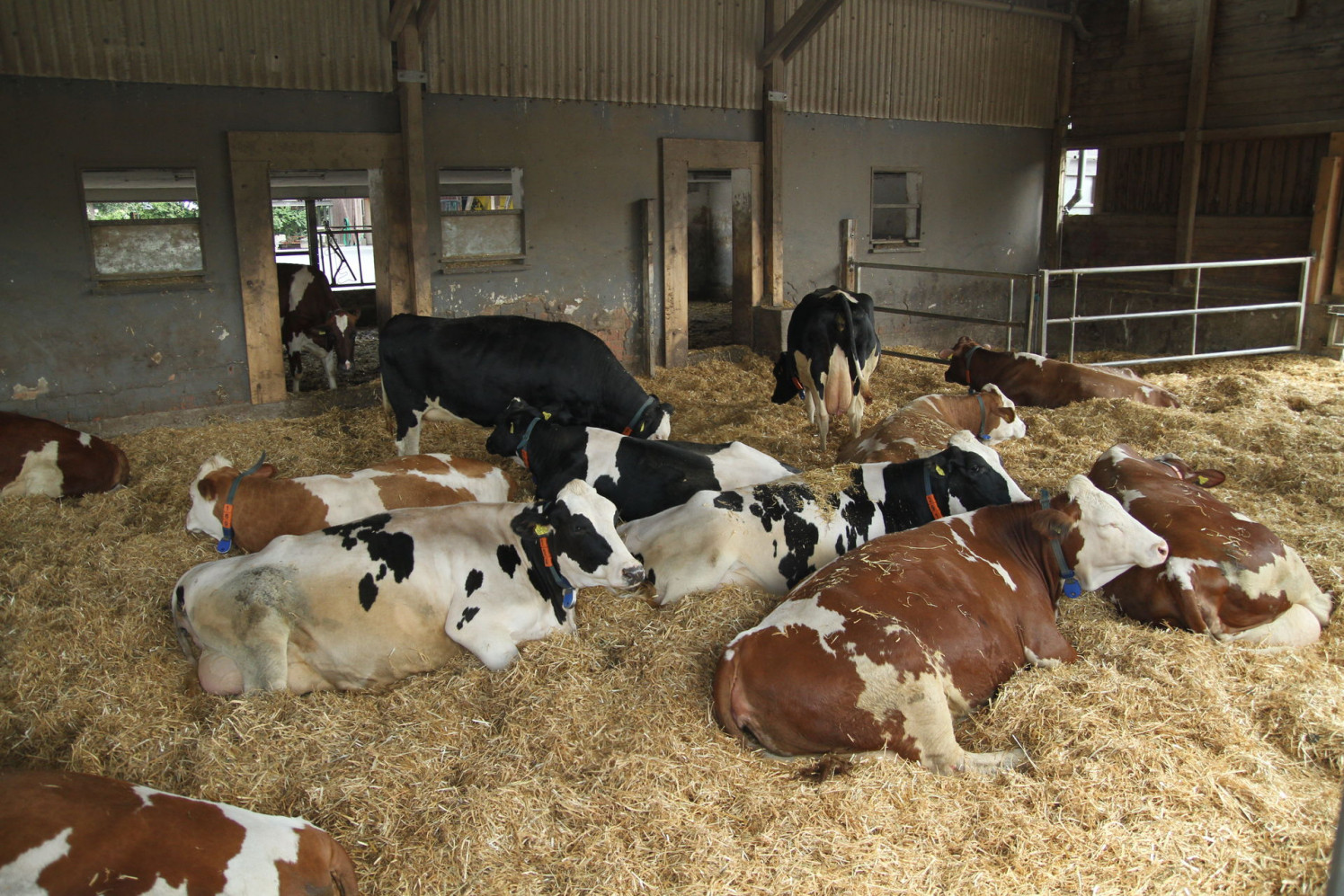 Why drying off at all?

During the dry off period, the cow rebuilds her reserves lost during lactation, the udder regenerates and subclinical mastitis can heal. The cow must be prepared for the challenges of the following lactation. Furthermore, this phase also sets the course for the later colostrum quality and the fitness of the calf. It is important to reduce stress, stabilise the immune system and ensure the transfer of immunoglobulins into the udder. In order for these positive effects to take place, not only the husbandry but also the feeding management must be well thought out.

Would you like to learn more about the general facts about drying off?
👉 Then read on here!

Two-phased or single-phased drying off?

Basically, both concepts have their justification and are practical, each with their strengths and weaknesses. The decisive factor is which concept is better suited to your farm.

Two-phased dry off feeding is divided into the early drying off phase and the feeding phase. In the early dry period, which is eight to four weeks before birth, the cow is supposed to recover, the metabolism is relieved and the reserves are replenished. The energy requirement is greatly reduced due to the loss of milk yield, which is why the ration is often supplemented with straw and thus rich in crude fibre. This also leads to the maintenance of the rumen volume.

In the second phase, the feeding phase (three weeks before birth until birth), the changed needs of the dry cow must be taken into account. Feed intake decreases, which requires an increase in nutrient density in the ration. At the same time, the rumen should adapt to the ration of the lactating cow. Increasing the starch content in the ration with cereals also promotes the development of the rumen villi. In addition to the use of special feeds for ketosis and milk fever prophylaxis, the use of e.g. ß-carotene to improve the quality of the colostrum.

However, there are also downsides. On the one hand, several group and ration changes are necessary and on the other hand, the group sizes are reduced, which leads to smaller mixtures in the feed mixer and to a higher expenditure of time. To make work easier, it is recommended to give the young cattle ration in the 2nd year of life. From the point of view of labour management, the devalued ration of the lactating animals with adjustment of the mineral supply would be a compromise, but not optimal.

Single-phased feeding, on the other hand, is easier to implement in terms of labour economics, but is less well adapted to the needs of dry cows. This does not mean that it does not work – but it is always a compromise and must be considered on a farm-by-farm basis.

In general, single-phased dry off feeding requires homogeneous herds. The nutrient density must be adjusted so that the animals do not become fat at the beginning of the dry period and at the end of the dry period – despite reduced feed intake – there are still sufficient nutrients available. Weight loss at the end of the dry period must be avoided, as this increases the likelihood of ketosis. In the opposite case, fattening of individual animals also increases the risk of ketosis and also the probability of heavy births. In homogeneous herds, however, this can be counteracted well. The use of special feeds is often difficult and expensive if they are fed for the entire dry period.

Nevertheless, both ways lead to the goal. The most important thing is that the cows eat well, because a cow that is healthy eats well and a cow that eats well is healthy!

Which rations are recommended?

To prevent the rumen microbiome and villi from having to get used to too many new components at the beginning of lactation, the dry ration should contain as many components as possible that will also be fed to lactating cows later on – just less of them. However, buffering substances such as urea or sodium bicarbonate should be avoided. The ration should be stretched with straw. This reduces the energy density and maintains the rumen intake capacity. To avoid selection, however, the straw must be chopped very small. If the DM content is high, it is also advisable to mix in water.

Rations with only little grass silage are also recommended, because the sometimes high calcium and potassium values later inhibit the mobilisation of calcium and thus represent a main risk factor for milk fever!

The different fermentation qualities also harbour various risks to which the dry cows are particularly susceptible. Especially increased ammonia, butyric acid and amine contents cause more difficulties for the highly pregnant cows than for others. Here, too, you can rely on our support!

Our Josilac silage inoculants ensure and improve the fermentation quality of your silages!

We prepare your cows for birth

In order for dry cows to start lactation well, it is important to prepare them optimally for birth and the onset of milk production. Ketosis and milk fever prophylaxis is always a major topic.

The Keragen Longlife product line supports your cows throughout their lives – however, shortly before birth, the calcium and phosphorus levels must be kept particularly low, so the usual mineral feeds are not optimally suited for this period.

For milk fever prophylaxis, the Ca:P ratio should be < 1.3:1 in preparation for birth. In rations with soya extraction meal, JOSERA Prophos is the optimal dry off mineral feed. A Ca:P ratio of 0.7:1 stimulates the Ca metabolism and prepares the cow for an increased Ca requirement after birth. High vitamin D3 contents support the metabolism.

With a secure supply of trace and bulk elements as well as vitamins, you optimally support the metabolism of your future fresh milkers and thus actively counteract milk fever and ketosis!

Dry cow management lays the foundation for a good start into lactation!

💡 Remember: The high performance cow is made before and not during lactation!

Do you have any questions? Contact us – we will be happy to put together a customised concept for your dry risers. Contact us now!

Drying off – an ongoing issue

Drying off is a hot topic: udder and hoof health are a big issue, antibiotic dryers yes or no, feeding management and basically: why not just milk through? It is good that you are dealing with this topic!

Are you a farmer looking for a high lifetime yield from your cows and would like profitable milk production? Then the active ingredient package Keragen Longlife® from JOSERA is the right choice for you.