The correct use of mineral feed – the importance of a seemingly small component!

The necessary quantity of mineral feed is frequently discussed. It is often not clear why and how these quantities come about. This article will explain in seven steps the general use of mineral feeds. It is intended to help you with correct application. For further information, please contact your JOSERA consultant. 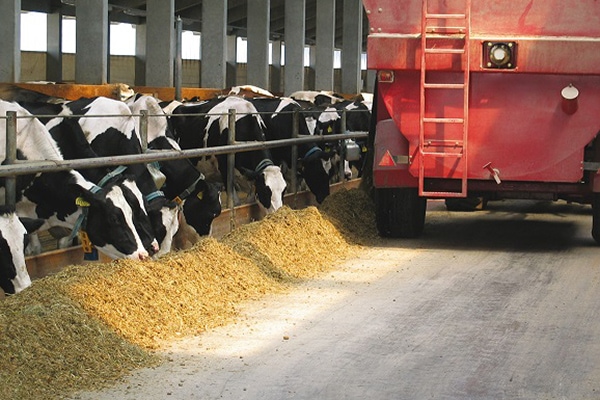 Home | Tips & Tricks | Feeding | Mineral feed | The correct use of mineral feed – the importance of a seemingly small component!

How should mineral feed be administered?

Mineral feed is available in different versions. A distinction is made between pelleted, loose, and mineral feed in the form of licks.
The powdered mineral feed is the best variant for basic supply. Pelleted mineral feed is usually a bit more expensive to produce because of the pressing. The heat generated during pelletising can also adversely affect some nutrients. Licks are only suitable for supplementing in the pasture or as an additive in the stable. They are not suitable as a basic supply because it is not possible to control and ensure that an animal consumes the required quantity.

You might ask yourself: “Should I administer the mineral feed separately via the feed mixing vehicle or mix it into the concentrated feed?” Concentrate feed suppliers already offer ready-made mineralised concentrates. The difficulty with a concentrated feed-mineral feed mixture lies in giving the right amount to the cows. Not every cow needs the same amount of mineral feed (different lactation/development stages). Adjustments must sometimes be made by changing the feed composition. This is not as possible in a ready-mixed mixture as it is with individual components. This often leads to over- and under-supply of quantities and trace elements or even concentrated feed. Both can lead to additional costs. In addition to higher feeding costs, there can be undesirable health problems and associated treatment costs. In principle, the separate use of a powdered mineral feed via the mixing vehicle should be the first choice.

As far as the composition is concerned, there are different kinds of mineral feed. Here it is necessary to determine the required amount of calcium based on silage analyses and a ration calculation. Calcium is important for the stability of bones and hoofs as well as for muscle function, fertility, and udder health. During lactation, the ratio of calcium to phosphorus should be between 1.5:1 and 2:1.

How do I ensure the correct supply of trace and bulk elements?

There is quite rightly a lot of talk about different compositions and binding forms. Organically bound binding forms, chelates, propinates, and glycinates can be better converted by animals. The genetics of a high-performance cow and social requirements (e.g. animal welfare and sustainability) are thus taken into account.
Even more important, however, is the correct dosage. But what is the point of discussing the composition if the quantities required by the animal are not administered? The tricky part is the interaction of the elements with each other (see graphic).

Thanks to intensive development work, the correct use of JOSERA mineral feed is quite user-friendly because the quantities and trace elements are in a balanced relationship to each other. Among other things, the amount to be fed depends on the milk yield and the feed intake. Depending on the type of mineral feed, there are two different dosage levels (recognisable on each bag). These can easily be adapted to the respective needs.

The dosage levels already indicate that the required amount of active ingredients depends on the performance. Lower performance requires less mineral feed. Because the output is parallel to the feed intake, the amount consumed is practically self-regulating when cows are fed according to the feeding recommendation. In the case of sick animals or during periods of enormous stress (e.g. hot summer months), it is advisable to slightly increase the amount of feed.

The use of licks can help to ensure the supply of salt and minerals for all animals. Regarding the effect in the animal, it doesn’t matter whether stones, buckets, or tubs are offered. However, there are differences in price, product strength, and ingredients. The requirements for the products should be discussed with the contact person for feeding. There is a wide range of licks on the market. This ranges from pure salt masses and basic mineralisation to special forms of mineralisation with and without vitamins and protected components.

When using licks, it should be noted that they are only used in addition to “basic mineralisation”. During application, it can never be guaranteed whether the animals use this form of mineral supply and, if so, to which extent. A guaranteed basic supply is therefore only possible via the daily ration or via a special mineral/concentrated feed mixture. However, licks can be helpful if different performance groups receive the same ration. Depending on the lactation performance and the associated feed intake, the animal’s need for minerals also changes. For example, if a fresh lactating cow (up to 100 days) is provided with the same ration as an old milking cow, compromises are made that do not meet the respective requirements of the cows. The consequences are highly individual. For example, poorer performance, fertility, or udder and hoof health can occur.

The same applies if young cattle receive the feed remains from the lactating cows. The ration may no longer correspond to the contents as at the time of the fresh presentation. Through selection, components such as concentrated feed and powdery components such as mineral feed can be licked up by the soil and thus absorbed more. As a result, the mineralisation in the “feed remains” decreases. To make matters worse, the young cattle cannot eat the same amounts of feed as a lactating cow. This may result in a mineral deficiency in the young cattle. Under certain circumstances this can be the foundation for negative long-term effects such as poor hoof health and fertility. An additional supplement with mineral and salt licks makes sense here.

When licks are provided in addition, care should always be taken to ensure that the cows receive sufficient drinking water. As with humans, a greater intake of salt also increases the need for fluids. It is therefore advisable to place licks in the vicinity of drinking troughs and to check the drinking troughs regularly for cleanliness and flow. The latter in particular is decisive for the summer months, especially when the drinking water supply is provided by quells. For grazing, licks are often the only way to supply the animals with minerals. Pasture grazing often doesn’t cover the needs of the animal. This can lead to deficiency symptoms. This can reduce or even nullify the often positive effects of grazing. Use in the form of buckets, tubs, or licks is advisable in any case.

In regional terms, the prolonged drought has led to high losses in maize and grassland. For maize silage, the result where crops with no cobs or poor cob development.

Mixed rations have become increasingly common since the late 1990s. What are these systems, and which has proved to be the most effective? Is TMR the right choice for your business, or has PMR proven to be a better system?