In the following part of our Tips & Tricks we want to give you informations about the problem of displaced abomasum with your dairy cows and what you should know about it: 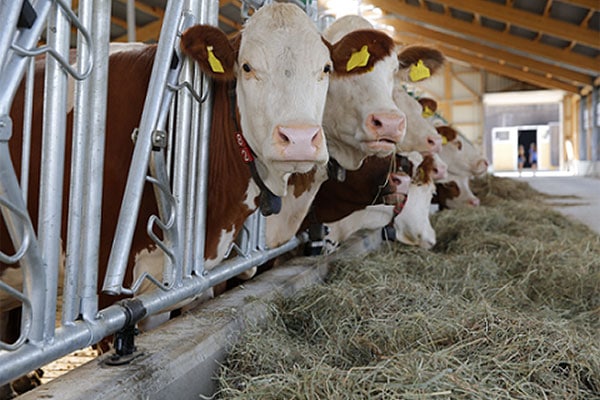 How can I recognise displacement of the abomasum?

Displaced abomasum often occurs in the first weeks after calving.

Cows are apathetic, eat poorly and lose weight and therefore also produce less milk. A cow that is or becomes ill at the beginning of lactation will struggle to deliver its full performance potential. Obviously, we want to do everything we can do prevent our cows from becoming ill in the first place. But why does it always come back to displaced abomasum and how can we prevent this?

In left displaced abomasum, the abomasum becomes displaced upward along the left abdominal wall under the rumen.

In right displaced abomasum, the abomasum rises between the intestine and abdominal wall and can lead to a rotation of the abomasum, which in the worst cases results in the death of the organ and thus the loss of the animal.

The causes of displaced abomasum are mostly related to feeding. Ingesting large amounts of concentrated feed and a lack of structurally effective crude fibre (crude fibre with “pricking” effect) results in the formation of numerous acids in the rumen. These acids also enter the abomasum via the rumen. This can lead to the mobility of the abomasum being restricted and an increased production of gases causing swelling of the abomasum. Under unfavourable conditions, the abomasum can rise up along the abdominal wall as the gases move upwards.

An additional negative effect on abomasum health is the calcium balance. Calcium is responsible for muscle flexibility. The lack of calcium, which often occurs around the calving period, thus favours a state of inertia in the abomasum with the consequences described above.

To counteract displaced abomasum, feed management becomes a priority. An optimal dry period with slow habituation to the lactation mixture is therefore a prerequisite, so that cows remain healthy at the start of lactation. Abrupt changes in feed should be avoided.

However, other factors may also influence the development of displaced abomasum. These include stress, discomfort, overcrowding, heat or difficulties in calving, for example. Displacements of the abomasum are often associated with pre-existing conditions such as ketosis, milk fever, post-natal complications or uterine inflammation.

Giving cows a specially-formulated drink directly after calving has proven to be effective. Usually cows drink more than 50 litres of water if made available immediately after calving. The energy and electrolyte supplements provided in the specially-formulated drink also ensures that cows quickly regain their strength and can begin lactation in a fit and healthy manner.

If despite all efforts displacement of the abomasum occurs, it is essential to consult a veterinarian.

If you have any questions about optimal feeding management, simply contact the JOSERA consulting service.

As a well-known German cabaret artist and doctor put it, “the liver grows with its tasks”. Not that he knew about the extraordinary achievements of our dairy cows.

High germ content in the environment negatively affects the animal’s immune system. The organism is busy producing antibodies and eliminating germs instead of producing milk, growth or reproductive hormones.