What to do with young cattle – rear them yourself, outsource the rearing or purchase? 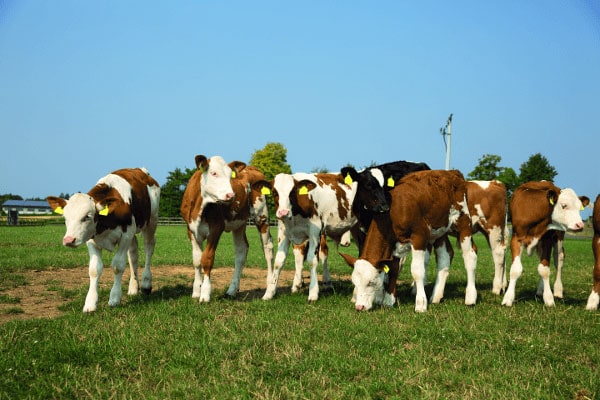 Home | Tips & Tricks | Rearing & breeding | Calf rearing | What to do with young cattle – rear them yourself, outsource the rearing or purchase?

The number of female offspring suitable for breeding is a limiting factor for the proportion of dairy cows used for restocking, which in turn depends on the reproductive rate (= proportion of cows and heifers in the average cow herd used to restock the herd) and the average productive life. In order for the population size to remain constant, at least one female calf needs to replace a departing cow.

The costs of calf rearing are often underestimated. Healthy and productive juveniles for restocking are a fundamental condition for a successful dairy farm. Farm managers often focus on feeding and keeping dairy cows, as these are the main source of income. The rearing of young cattle, however, is often a secondary activity. In this area of farming, the greatest danger is that of not giving the animals the necessary intensive attention.

The following is an overview of the costs of the various stock replacement procedures.

An evaluation of the Bavarian State Research Center for Agriculture (LfL Bayern) shows the actual cost share of breeding in the total costs of milk production.
According to this evaluation, calf rearing on well-organised farms claims more than ⅓ of forage area and approximately 15% of working hours (Source: Evaluation of the Bavarian agricultural production branch analysis [BZA]).
Based on the full cost, approximately every fifth euro is spent on breeding. In practice, the database necessary to optimise stock replacement is often missing.
For the year 2013/14, the evaluation of the Bavarian agricultural production branch analysis shows an average full cost value of € 2,345 per heifer. Figure 1 shows the full cost breakdown per kg of energy-corrected milk (ECM) quantity (in Bavaria).

The cost level makes it clear that young cattle rearing is a branch of farming that should not be underestimated. The dominant practice in marketing young cows, which uses calves to bring additional revenue to the farm, does not change the generally low profitability of this branch of farming, even if prices here have developed even more favourably than in heifer marketing.

Advantages of rearing yourself:

Disadvantages of rearing yourself

Variant A “livestock stalling with daily fee” and variant B “sale and repurchase of the same animal” must be distinguished.

Influencing factors – how can the costs of stock replacement be reduced?

Prevention of calf losses or departures in heifer rearing

Departures of animals over 18 months old are particularly costly, as they have already induced high rearing costs.

Rearing costs can be significantly reduced by shortening the rearing time. According to current advice, the aim is for the first calving to take place when the cow is aged 24 – 27 months with a live weight of 620 – 650 kg.
Lowering the age of first calving means that food costs in particular can be saved.
These are reduced because the shorter rearing period results in lower maintenance requirements is to be covered. At the same time, maintenance-related expenditure can be reduced. A shorter rearing time also reduces the space required for young cattle.

Every animal that is lost to illness is an economic loss. Special attention should be paid to the management of cows around the time of calving and in the initial lactation phase.

The expected production value of the “new” heifer must be higher than that of the exiting old cow!

Alongside the age at first calving, the productive life is the most important factor in being able to produce equal amounts of milk with less livestock and less space. On average, Bavarian cows are only used for approximately 3 lactations before they depart. This corresponds to a restocking rate of 33% and regardless of the planned selection, means that almost all female calves must be stalled.
Above all, the fact that 18% of cows retire after the first lactation seems problematic. According to state control association evaluations, one third of cows leave the stall after the first lactation because of infertility, claw and metabolic problems.

If you have any questions about how to optimise rearing and thus reduce the costs of heifer production, ask your JOSERA consultant.

The “without genetic engineering” sector is seeing increased demand and continues to grow. Some dairy farmers are being forced to make changes to their rationed feeding programme.

Cereals in the feeding of dairy cattle

Due to falling grain prices, a feed made up of your own and potentially purchased grain becomes even more of an interesting prospect. Read more about the possibilities and limits.