Dairy farming and antibiotics – where can animal nutrition help?

Consumers and politicians are becoming evermore energetic in demanding a drastic reduction in the use of antibiotics in livestock farming – not without good reason, as there are many reasons why its used should be reduced. However, in order to be able to realise this goal in a timely and meaningful manner, we need to implement sustainable and holistic approaches. In this article, you will learn what contribution animal nutrition can make. 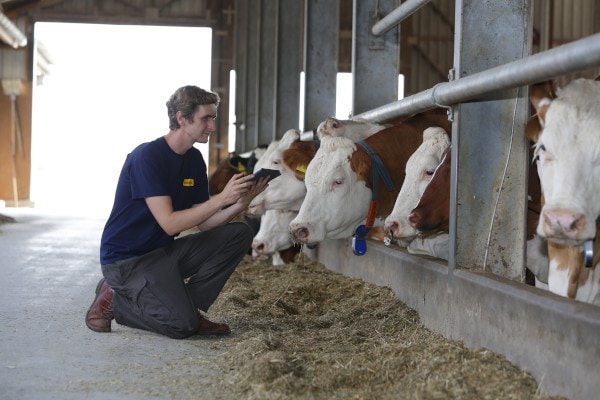 Why reduce the use of antibiotics?

The liver is attached to the abdominal cavity by ligaments. These ligaments divide the liver into four lobes. These are the left, right, square and tail lobes.
The liver consists of hexagonal lobules separated by connective tissue.

Since 1928, when the Scottish scientist Alexander Fleming discovered the antibiotic properties of penicillin, antibiotics have been an important part of medical treatment in the fight against infectious diseases.

Antibiotics help to maintain a balance between micro-organisms – they are produced in nature by fungi and bacteria to prevent competing organisms from growing and keep them in check. In the course of the 20th century, many such natural substances were discovered and others were synthesized artificially. As a result, we now have many different active ingredients at our disposal, which differ in their spectrum of action (which types of bacteria they can fight), their bioavailability (how much of the administered quantity reaches the affected tissue) and their resistance situation (how many of the actually sensitive germs have already become resistant). It is precisely this last criterion that presents us with problems today. It is not only antibiotics that have evolved – bacteria can also adapt to changing environmental conditions. Simply put, bacteria can “get used” to antibiotic substances, especially if they come into contact with the same active ingredients too often – they become resistant, meaning that the antibiotic loses its effectiveness.

To ensure that antibiotics are sufficiently effective against infectious diseases continue to be available, it is essential to avoid this habituation effect: By reducing the use of antibiotics to a necessary minimum.

The magic word is “prevention”

Many illnesses can be treated in a variety of ways, abomasal displacements with surgery, dehydration with infusions, injuries with bandages. But antibiotics are still our best weapon against all kinds of bacterial infections: Mastitis, claw diseases, respiratory diseases and much more. Once these diseases have occurred, they are often very difficult or impossible to control without antibiotic treatment. In order to reduce the use of antibiotics, it is also necessary to go to the root of the problem: How can we prevent or at least reduce the occurrence of these infections? And what role does animal nutrition play in this?

Please note: A solid base

Only a healthy cow can perform well. And an important Keystone for the health of dairy cattle is the balanced supply of protein and crude fibre in basic rationing to enable a functioning gastrointestinal digestion. Claw and udder health, as well as milk yield and fertility of dairy cows, depend decisively on how well the digestive processes in the pre-stomach system can be stabilised while at the same time ensuring a sufficient supply of nutrients.

A lapse of the fore stomach system, especially in the direction of acidosis (too acidic), places an enormous strain on the metabolism of the ruminant, which, in addition to the primary metabolic problems of the disease pattern, always leads to an increased susceptibility to various infections. an acidotic metabolic condition opten favour mastitis and claw diseases especially. But why?

The intake of unusually large quantities of easily fermentable carbohydrates (concentrated feed) promotes the growth of lactic acid-forming streptococci, which then push back the actual rumen microbiome. The increasing lactic acid content in the rumen lowers the pH value (the environment becomes acidic) and water is drawn into the rumen to compensate, which leads to diarrhoea. On the other hand, the mucous membrane is damaged and thus becomes more permeable for the bacteria and fungi that would otherwise be safely stored in the rumen. These can eventually be washed away via the blood and cause consequential damage to various organs.

In everyday dairy farming, these subclinical, chronic acidoses occur much more frequently than the acute rumen acidoses mentioned above. They do not always immediately lead to clear clinical pictures, but that is precisely why they are so important: They are often detected late and cause unnoticed damage until the time when they are detected. The principle corresponds to that of acute rumen acidosis, but here many different factors contribute slowly and gradually to the acidification of the rumen contents, which must be monitored and optimised during feeding.

While the basis for a ruminant-friendly protein and raw fibre supply is a good ration calculation, the walk through the barn (at least half of the lying cows should ruminate, normal faeces consistency, no “fat” cows) and a reflection of the milk data (milk fat: milk protein quotient between 1.0 and 1.5, as subacute rumen acidosis lowers the milk fat content) provide information about a good supply situation.

In addition to optimising all these factors, the addition of a buffer substance in TMR can also be helpful.

JOSERA DairyPilot FlavoVital® is the innovative worry-free package for the entire lactation period with constantly high performance. With the plant-based active ingredient package FlavoVital® as well as B vitamins and live yeast, JOSERA DairyPilot has a unique product composition, the effects of which have been proven by JOSERA research on more than 6,000 cows in various trial farms.

A balanced feed ration with an optimal “structure feed to protein content ratio” is essential for the health of the cattle claws. Although only high-grade acidoses lead to severe laminitis attacks, even minor acidotic lapse of the fore stomach system can be responsible for the formation of inferior claw horn and thus weaken the resistance of the claws to infectious agents. The consequences are laminitis, dermatitis (inter-)digitalis (Mortellaro, Panaritium) and others. Once the claws are infected, the prospects of a cure without antibiotics are usually unfavourable.

It is therefore important to keep the claws resistant – by avoiding metabolic lapse (described above) and a sufficient supply of minerals and trace elements, which are essential for healthy horn growth. First and foremost, biotin, B vitamin, promotes the quality of the claw horn, but zinc, copper and sulphur also contribute to healthy claw growth.

In addition to optimal milking hygiene, good milking and dry barn management as well as suitable stalls with appropriate bedding, the right nutrition can also contribute to a healthy udder.

The high performances that the cow udder has to withstand during lactation and the mechanical stress to which it is subjected make the sensitive epithelium vulnerable. While vitamin A serves to protect the epithelium, the trace element zinc plays an important role in epithelial regeneration. In the course of the cellular defence (a protective immune reaction), so-called “free radicals” are also produced in the udder, which results in an increased consumption of the antioxidants vitamin E and selenium. To meet this need, it is recommended to use mineral feeds rich in zinc, selenium, vitamin A and vitamin E to keep the udder healthy and resistant.

Hypocalcaemia, which occurs mainly at the beginning of the lactation period, also favours the development of mastitis, as it can, among other things, also affect the function of the teat sphincter muscle and thus make it easier for bacteria to penetrate the udder. Good calcium management therefore not only helps to avoid milk fever, but also to prevent mastitis.

🧐👉 Please read our guides on udder and mastitis.

Hannes Pump’s farm had some problems with 6-7 cows a month suffering from mastitis. This also meant high animal losses for the farm. Watch the video here:

A good start in life

Calves often have to be treated with antibiotics in the first months of life. Umbilical inflammation, respiratory diseases and diarrhoea with fever are probably the most common problems requiring that require the use antibiotics in calves. But here too, nutrition can make an important contribution to strengthening the immune system.

The basis of the immune system of young calves is an adequate supply of high-quality colostrum.

An important issue is and remains the content of immunoglobulins in the colostrum. The colostrum of many female calves does not reach the values or the amount of milk that would be necessary for good protection. One possibility here is to build up a stock of frozen colostrum from old cows that have good colostrum. Alternatively, immunoglobulin-rich drinking supplements can also be useful In general, calves should be fed with a high-quality MAT in the first few weeks, regardless of the colostrum.

JOSERA IgluVital is a new premium milk replacer with carefully selected raw materials, pro- and prebiotics, and immunoglobulins. The formula is adapted to the needs of the newborn calf and offers the highest level of safety for the young calf. 👉 to the product

Especially in the winter months, a lack of ß-carotene in the basic feed is often detected. A lack of ß-carotene (a precursor of vitamin A) can reduce the resistance of the mucous membranes and thus lead to diarrhoea and respiratory diseases. However, in order for the colostrum to contain sufficient amount of ß-carotene, ß-carotene-rich feed or appropriate supplementary feed must be added to the mother cow’s ration during the dry standing phase.

JOSERA Betavit is a vitamin concentrate which helps your animals to achieve better fertility. It serves the specific compensation of ß-carotene deficiency and supports the metabolism in the calf reproduction phase with year-round silage and corn rations 👉 to the product

A well-designed basic feed and the targeted use of mineral, vitamin and trace element additives can make a significant contribution to the health and resistance of dairy herds. Phytogenic additives also have a positive influence here. This already counteracts the development of infectious diseases and thus has the potential to reduce the use of antibiotics in the dairy industry.

But also the feeding management itself can reduce the spread of bacterial infections: Pay attention to good hygiene when feeding calves (cleaning the buckets and teats, not leaving the milk and especially the colostrum standing for long periods) and a sensible sequence: in order not to unnecessarily expose the youngest, and thus most endangered, calves to germs, they should always be fed first.


Your operational goal is to increase the performance of your herd? Or are the health and resistance of your herd important to you? Then read more about JOSERA DairyPilot here!

Ovarian cysts- a common cause of fertility disorders

A nuisance many farms are aware of is multiple inseminations, which are caused by fertility disorders. Ovarian cysts are a common cause here. Cows with cysts are problem animals.